No, that isn't a euphemism for anything, although I kind of wish it was.

For my first three "away" tours, we packed our bikes in cardboard boxes on this end, which were then discarded on that end, to be replaced with new cardboard boxes for bringing the bikes home at the end of the tour.  Sounds simple, but there were actually more complications and headaches than I wanted (because, who goes on vacation to have complications and headaches??).  My "Perils of Poor Planning" blog focused essentially on problems with packing and flying with the bikes.

There had to be a better way.

In 2018 I met a guy at my workplace (cheers, Keith S!) who tours regularly with his wife.  They've been touring together for years (I think he probably said decades).  She hand-made them custom bike bags that they fly with.  When they get to their destination, they unpack, stick the bike bags into their luggage, carry them along on tour, and then use them again to fly home.  Hmmmmmmm... that sounds promising (if only I had someone to custom make me a bike bag!).

When we were planning our 2019 tour, Laura booked her flights with Air Transat, which not only accepts bikes in plastic bags, they actually INSIST that the bikes be in bags, which they provide.  Hmmmmmm... that is intriguing.  Our friends, Joerg and Barbara, did a tour in Colombia in early 2019 for which they packed their bikes in plastic bags.  Joerg said it took a bit of convincing on the far end to get the airline to take them when it was time to come home, and they had to sign a special waiver, but the bikes made it home safely and they considered it to be a very positive experience.  Hmmmmmmm...

So, I started researching bike bags.  There are, of course, lots of bags available, but most of them are way too big, bulky and heavy to carry along with you while you're touring.  In short order I discovered these relatively compact plastic bike bags from Wiggle.

I ordered a couple for Brent and me, and suggested to Ann that she do the same, which she did.

The bags arrived quickly, and they are just like enormous freezer bags.  Open on one end to slide the bike in, and that was about it.

As our tour date grew closer, I became somewhat anxious about flying TO France with the bikes in the Wiggle bags.  What if WestJet wouldn't let us on the flight?  What if the bikes were seriously damaged because they were in a bag, rather than in a (questionably) more sturdy cardboard box?

So, to fly the bikes to France, we reverted to bringing them in cardboard boxes.  The Montague Twins were brand new, and we'd gotten their original cardboard boxes from the store where we bought them.  Ann, Geoff and Lynn did the usual thing of begging boxes from local bike stores.  All the bikes arrived safely.  Geoff and Lynn arrived the day before us and took theirs in a cab to the hotel where they unpacked and assembled.  Laura, Ann, Brent and I all arrived on June 2nd, unpacked and assembled at the CDG airport and rode from the airport to our hotel.

Ann, Brent and I all carried our brand spanky new Wiggle bags with us throughout the tour.  We also carried print-outs of:
1) The WestJet web site page describing that bikes must be in a box OR a bag;
2) The Wiggle bag product information, demonstrating that our over-sized freezer bags were, in fact, bicycle bags.

On our fly-home date, we headed over to the airport super early because we'd have to prepare and pack the bicycles there, and because I didn't know what kind of new complications, headaches and perils we may face by using the Wiggle bags.

We found a nice out-of-the-way (sort of) spot in which to prepare and pack the bags, a short distance from the WestJet counters.  Within moments, a WestJet representative bee-lined over to us and asked us if we had boxes.  We explained that no, we didn't have boxes, we had bags to put the bikes in, and I offered to show him my documentation.  He wasn't having any of it.  He kept insisting that we needed to have boxes "for the process".  Not sure what that meant, but he repeated it several times, so clearly it was of utmost importance to him.

So, after a brief conversation that went nowhere, he said that he was going to go find a supervisor.  We thought that was a splendid idea.  We kept preparing the bikes to go into our bags.  He returned after several minutes, sans supervisor, but still insisting that we needed boxes "for the process" (and claiming that he had confirmed this with a supervisor).

We asked him where we could get boxes.  He waved at the escalator and said to go get some from Air France upstairs.  Brent and Ann went off to talk with Air France while I stayed with our bikes and luggage.  They returned shortly to report that Air France is not actually in that terminal - they're in a separate terminal.

WestJet guy then, again, said that he was going to go find a supervisor, which, again, we thought was a splendid idea, because maybe the supervisor would take a glance at my documentation.  He left, and we finished preparing the bikes and started putting them into the Wiggle bags.  WestJet guy returned with a supervisor, who took one look at what we were doing and said yes, that is perfectly fine.  THANK YOU WESTJET SUPERVISOR GUY!

We finished packing our bikes and headed to check-in.  When we got to the front of the line, our check-in rep looked at the bikes in bags.  She signaled another supervisor, who came over, and after a brief conversation in French, the check-in rep let us check in with the bikes in the bags.

So, off they went.  I hoped that the rumors I'd heard that the "baggage smashers" were actually more careful with bikes in bags than in boxes because:
1) They could see what they're handling;
2) Bikes in bags are easier to grab onto and move around. 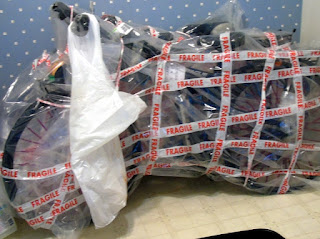 When we finally arrived home, the bikes had made it just fine.  Our Wiggle bags had some holes in them: some small from "pokey bits" of the bicycles that hadn't been padded enough, and a few long slashes from... well, I don't know what from.  But the bikes were just fine.

I will definitely be using Wiggle bags from now on.  The fact that they eliminate the hassle of finding a box to bring the bike home in makes them essential gear for eliminating a whole passel of  complications, headaches and perils.  They did come with their own set of headaches, but thankfully they were short-lived and relatively painless compared to what we've dealt with on other tours.

After we got home, we decided that the first Wiggle bags were beyond repair, and in future we'd have to do a better job of padding the bikes.  So, I ordered some new bags from Wiggle for future tours.  I was able to get free shipping if I ordered five of them... soooo... I ordered five.  Today I'm selling/lending one to an adventurous young woman from Edmonton who is flying to Penticton this Wednesday.  I hope she has a pain-free experience with the Wiggle bag!